How to stop being a graphic designer — redux

Towards the end of last year I let forth an angry rant about being a graphic designer  onto the internet with little expectation of a response.

I’d had a nervous breakdown, quit my design job and then taken time off to go travelling, before spending a good chunk of 2012 working on CycleLove.

And I was still hugely confused about whether I wanted to be a graphic designer or not.

So I woke up one morning and got crazy with words about the situation.

Whilst I continued to grapple with my career crisis, the article quickly became the most shared pice of writing I’d ever published online. Emails and comments came in from unexpected places and (pleasantly, I think) surprised friends.

Over time I saw that more and more people were googling ‘I hate being a graphic designer’ or ‘quit graphic design’ and ending up at my article.

I realised I had touched a raw nerve in the profession.

There are a lot of disgruntled graphic designers out there needing help. (Hey! Come on in folks…)

The unexpected popularity of the article set me thinking. How could I help graphic designers explore more entrepreneurial paths? (And was I qualified to write about this without knowing the answer myself).</p>

What could you do instead of graphic design?

My original article</a> included a few vague ideas for alternative careers and pursuits.

Since then it’s dawned on me that most designers don’t completely abandon their career and skill-set.

Instead they add a second track, one that often sits alongside their existing studio practice.

Similarly, I’ve realised that I can’t shake off my design roots, nor do I want to. Good design still matters to me. And bad design can still REALLY piss me off. Grrr.

So unDesign is not going to be about abandoning graphic design all-together.

Instead it will be about expansion, new modes of operation, and finding new ways to utilise your design skills.

Here are a few of my favourite ways that designers have already found to do this: 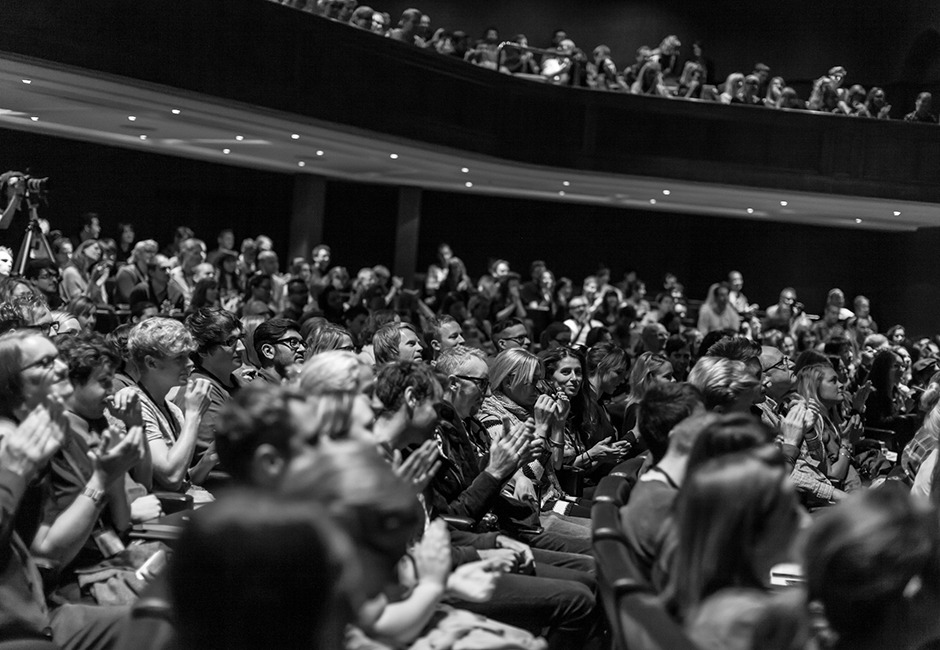 The studio that I used to work at in Glasgow expanded to New York and London, and one day word came in that one of the junior designers was quitting to concentrate on his blog. I remember being a little sceptical (and jealous). The designer was Will Hudson who with the help of his business partner Alex Bec has nurtured It’s Nice That into a massively popular site which champions creativity, whilst hosting its own events (their Here 2012 symposium is pictured above) and selling a range of products including books, magazines and t-shirts. At the same time they run INT Works, a creative agency with an impressive roster of clients like Nike, Selfridges and Unilever.

Will is one of the designers I’m interviewing for UnDesign, so stay tuned to find out more about the relationship between the two companies. 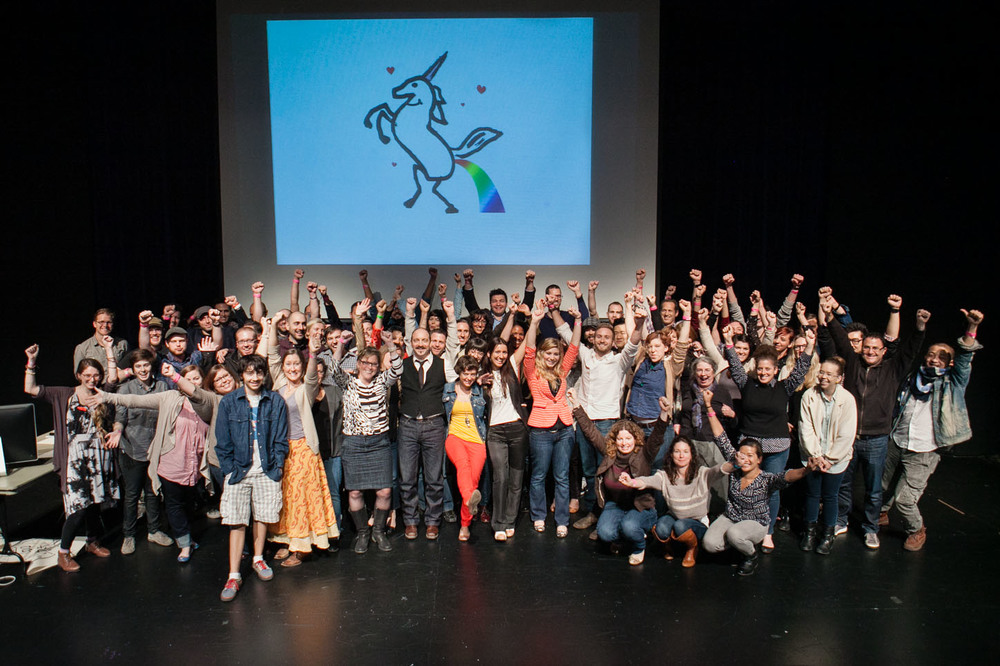 A graphic designer turned creative agony aunt and ass-kicker, James Victore has a loose, expressive style which is almost the exact opposite of my own work. Alongside his studio, James has a YouTube channel called Burning Questions where he answers questions from lost souls (from “I quit my job. Am I crazy?” to “What the hell am I doing?”) as well as hosting creative symposiums designed to re-ignite the fire inside. 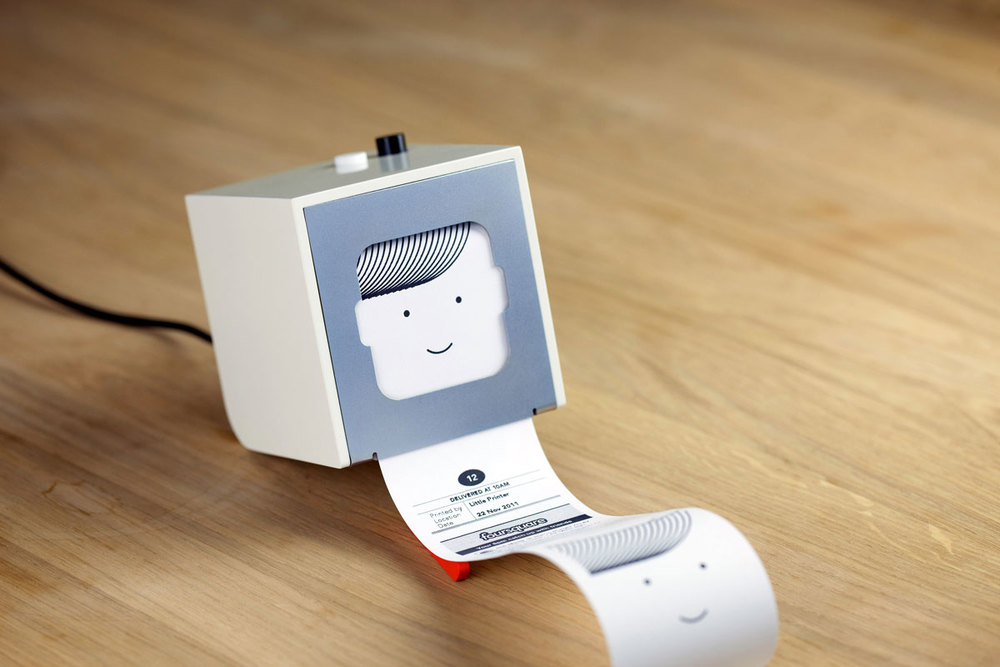 London’s Berg have dropped client work to focus on products like Little Printer, an uber-cute thermal printer which uses a web connection to print miniature newspapers for its owners. According to their blurb “graphic design is at the heart of everything Little Printer delivers” and looking at their website, I’m inclined to believe them.

Back in 1999, 37signals was a fairly standard, if opinionated, web design studio. As their client base grew and their workload increased, they found themselves in need of a project management tool and decided to roll their own solution. Launched in 2004, Basecamp quickly became a huge hit thanks to its essentials-only feature set and pared-back design, and the company now sells a full suite of software solutions to hundreds of thousands of customers on a subscription basis (The 37signals aesthetic, incidentally, seems to irk a lot of graphic designers).

After successfully submitting a few of his designs to sites like Threadless, Jeff decided to start selling t-shirts on the side to supplement his design work. In his own words: “That was literally the start of Ugmonk. I had no idea that it would turn into a full-time gig, but I’m glad I did it—it’s been the most fun and creatively satisfying thing I’ve done”.

Write about design
Paul Jarvis → Be awesome at online business

Canadian designer Paul Jarvis isn’t content to just build beautiful sites for his clients. He also writes about design, social media and online business, publishing his own books as well as penning content for the likes of 99u and Fast Company.

Check out the recent self-publishing hangout which both Paul and Nathan participated in for more ideas and tips on monetizing your own content.

This is just a selection of the incredible array of designers out there who now count customers as well as clients amongst their sources of income. Which begs the question…

Why haven't I started writing unDesign yet?

I’m asked this every few weeks at the moment. It’s starting to piss me off a little actually, but I guess really I’m angry at myself more than anything. And I’m grateful that the people who know me aren’t letting me wriggle out of the unDesign project.

When I approached my first set of potential interviewees, 75% of them responded with an immediate yes to my request.

Then the project ground to a halt.

In the past I would probably have used the excuse that I was too chicken to start interviewing the creatives I had shortlisted. But I don’t wake up sweating in the morning at the prospect of speaking to these guys. I’m not really “afraid”.

In reality… well… I’m not sure.

Beating myself up about it isn’t going to help.

For whatever reason it’s taken me a while to get going and it was only this month that I published my first interview (with Trakke founder Alec Farmer) .

Because CycleLove isn’t generating any cash (remember folks: a blog is not a business), I’ve been doing an increasing amount of freelance design work to pay the bills.

And somewhere amongst all of that, unDesign has fell by the wayside.

But I’m still committed to the project.

I’m writing more than I ever have. And by the end of my 30 day writing experiment I should be even better equipped to get unDesign properly underway.

I’m ready to do the interviews, to make more connections between the worlds of design and business, and to help as many designers as possible to diversify their income stream.

What do you want from unDesign?

I want to write a manual of reinvention for anyone feeling exhausted by the creative treadmill. But to do that I need your input.

What is it that you don’t like about being a graphic designer?

What’s been grinding you down?

What get’s you fired up?

What is holding you back from starting a business?

Which designers-turned-entrepreneur would you most like to hear from?

Posted to careers, graphic-design in 2013.