Almost as soon as I tweeted a link to an article entitled “I’m Thinking. Please. Be. Quiet” yesterday, the security alarm in my house started beeping loudly every sixty seconds.

I went downstairs to see what it had to say for itself that was so important.

I pressed all of the available buttons.  And again in random combinations.

Then I realised I was going to need the four digit access code for the system in order to make anything happen. But it was a bank holiday and I didn’t want to request an emergency visit from an engineer, so I decided to leave the system to its own devices and try to ignore it.

It turns out the beeping was quite loud, even from my bedroom upstairs.

So I didn’t get much sleep last night.

And I really don’t feel like writing a thousand words today.

But I’m going to write for twenty minutes and see what comes out.

Most of it will probably be crap, so feel free to stop reading at any point.

I lay wide awake at 2am last night, regretting the two and half pints I had drunk on an almost empty stomach. I wondered if I should stop drinking for the duration of my 30 days of writing. Or start drinking even more. One way or the other.

It reminds me a lot of my own life, just without the women and the sex and the alcohol.

Maybe reading it has made me want to write more.

It has definitely made me want to drink more.

I haven’t made a start on that yet, though.

One of the first things I usually do when I can’t sleep is listen to some music.

I keep some cheap headphones and an old iPod by my bed for just such emergencies. Its physical buttons come in handy in the dark when the glow of a screen is too much. When I was a kid I used to do the same but with a cassette Walkman. Usually these days I put on a few of my own tracks first of all. Some of them are almost like personal lullabies. I wonder why I never finished them. I wonder why I never finished writing the lyrics which I have written down in fragments through my notebooks. I wonder if I could be a musician.

Then my mind switches back to the bullshit du jour.

How am I going to stop being a graphic designer?

Do I even want to stop?

How do I know?

Well, whenever I see bad design it gets my back up.  So I must still be passionate about good design, to some extent.

And I’ve invested a lot of time in designing for my own projects since becoming self-employed.

What’s wrong with me then?

I think that my last job killed off a lot of my desire and self-belief. Three years of working to someone else’s house style can do that to you, I guess. Sometimes I wonder what would happen if I threw my last ten years of graphic design work out of the window and started again from scratch. I could make bold, daring, uncommercial work for my dream clients. Maybe I could fall in love with graphic design again. Maybe maybe maybe…

I’ve also realised that I was placing too much value on my creative output, as if my own self-worth could be judged by my design skills. But I am not just my work. </p>

You are not your work.

That would be stupid, if you think about it.

Imagine if you were constantly churning out the same old stuff but in different variations.

It would get to you in the end.

There’s a guy in London who designs all of the signage for the fried chicken takeaways which are scattered throughout the city with similar frequency to the chicken bones on its high streets.

When I say all, I really mean all… he estimates that he has designed 90% of the fried chicken signage in London.

I don’t know how he does it. 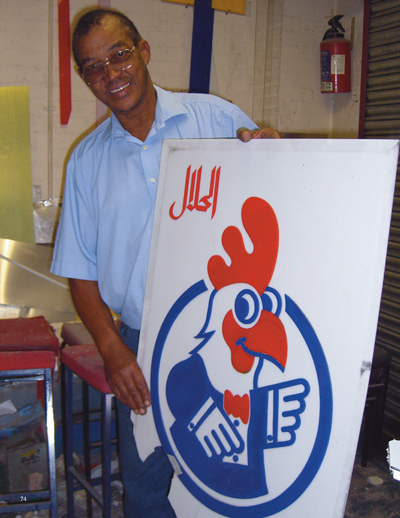 So he’s now affectionately known as Mr. Chicken to those in the trade.

The man has totally cornered the market.

If you’re opening up a new joint, he’s the guy to call.

Good design is about creating novelty and personality, but not too much so that it alienates the user.

Mr Chicken is onto a good thing then, it seems. His work is in demand. It markets itself. And he has the chutzpah required to come up with endless variations on his theme and keep his clients happy.

His work set me thinking about other design trends. (This was still in the middle of the last night, by the way).

If you look at the websites of the latest YCombinator startups, they all look the same.

To an extent that is ok.

They probably don’t want to invest too much in design at this early stage. Too much novelty in web design results in user headache. But visual conformity leads to user boredom. And makes it harder to remember who is who.

“Yeah. Those guys with the 100% width fluid layout, the endlessly long scrolly pages and the horizontal navigation and the nice photos of their product beside laptops in coffee shops with a blurred background” .

I don’t want to be those guys.

I don’t want to create mediocre designs for huge corporate clients I don’t care about. (Working for cool startups might be ok though).

I don’t want to be afraid of expressing myself any more.

I don’t want to be Mr. Chicken.

I’ve played my life safe. Taken less chances than I could have done. Chased only a couple of my dreams.

I’ve laid in bed at the dead of night, headphones on, eyes wide open, thinking about could-have-beens for too long.

I’ve avoided writing because I didn’t have endings for anything.

But at least I have a start now.

« Punks don’t ask permission. Neither should you. How to stop being a graphic designer — redux »