Getting unstuck when you’re working on your own projects 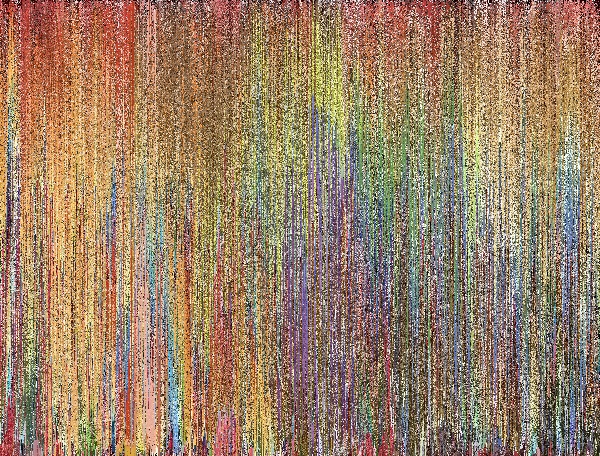 The image above was created by a graphics bot called Pixel Sorter which got stuck in a duel with another bot on Twitter. I tweeted about it yesterday and they both replied back to me — who said robots couldn’t make art?

But when it comes to making your own art (instead of working for other people), it can be tough to keep things moving.

You don’t have the usual restrictions with regards to time or budget, nor the usual feedback loops from your client.

So I wanted to share some helpful suggestions from Gav Strange, a graphic designer who also makes films, gives away free art once a week, designs minifigs and a million other things alongside his day job at Aardman Animations…

3 tips on being your own client (and getting unstuck)

Leave it alone for a bit
Move onto something new or take a break, you’d be amazed what your brain cooks up in its subconscious when you’re not directly thinking about the problem. I really recommend finding John Cleese’s talks on creativity, he speaks about the ‘open’ and ‘closed’ states of the brain which is really useful stuff!

Share it with people and get feedback
Sometimes, when its a personal project, you want it to be exactly how YOU want it to be, so you don’t want any input from anyone else. But, if you are finding that you’re stuck, then show it to people, see what their reaction is, see what they like dont / like. Talking out loud about something you’ve had quietly in your head for ages will give you sometimes a much-needed fresh perspective!

Finish the damn thing
Even if you hate it, even if you think it’s the worse idea in the world - persevere! Get it to a point where you can comfortably put it to bed. You’ll be surprised by what that does for you mentally, to be able to put something to rest, even if you want to bury it in a shallow grave. It free’s you up to move onto the next project, bringing with you the knowledge of exactly how to or how not to do things!

I’ll leave you with “5 factors that you can arrange to make your lives more creative” from the John Cleese lecture that Gav mentions: