How to sidestep creative perfectionism by acting like a startup

Creative people, myself included, often get hung up on how things look.

“I need to design a Wordpress theme for my blog before I start writing.”

“If I can just get the logo right, I’ll be ready to launch.”

“Once my business cards are done, I’ll start reaching out to people.”

For people who make things, the desire to get them “right” before showing other people is an understandable trait.

You could say it’s in our DNA.

Or you could argue that trying to make things perfect is a bad habit.

Stop polishing and ship instead

He’s got a good point of course. It’s almost impossible to finish something, as there will always be improvements, tweaks and additions you can make.

And Seth isn’t the only person championing the value of getting your stuff out into the real world.

The Lean Startup by Eric Ries has made waves far beyond its Silicon Valley origins because it optimises the most important part of any business: getting your product in front of customers.

Here’s the basic premise from a comparison of the Lean Startup approach with design thinking:

Don’t wait for perfection when creating something new, just get a ‘minimum viable product’ (the most basic workable version) in front of a customer as quickly as you can. Get customer feedback based on actual observed market behaviour (‘customer validation’) then continually iterate your product and market strategy (‘persist, pivot or kill’) based on that feedback until you hone in on exactly what customers want.

Strip your idea back to the bone

When I tweeted about this blog post earlier today, a friend replied that it reminded him of a favourite mantra of his: “Get shit done”.

Are the two approaches similar? Yes. But there’s a bit more science to the Lean Startup, which you’ll discover if you read the book. (I’ll be honest, some of the latter sections of it were slightly over my head as a designer).

But the core concepts are simple enough for anyone to understand: including that of building an MVP, or minimum viable product. The important thing about an MVP is that it doesn’t have to be beautiful. It just needs to work well enough convey an idea, so that you can collect feedback, which you use to improve the product, and then collect more feedback…

Let’s take a quick look at two examples of MVPs from Silicon Valley.

First up: Dropbox’s pitch video, which on the surface looks like a standard product demonstration:

In fact it was cleverly peppered with in-jokes for the Digg audience (I don’t get any of these myself but hey, I don’t read Digg much either). The video subsequently went viral, sending hundreds of thousands of people to the Dropbox website.

Secondly: the landing page that launched Buffer (a brilliant tool for scheduling social media updates). This consisted of a description of what the product did, with a button you could click to see the plans and pricing. 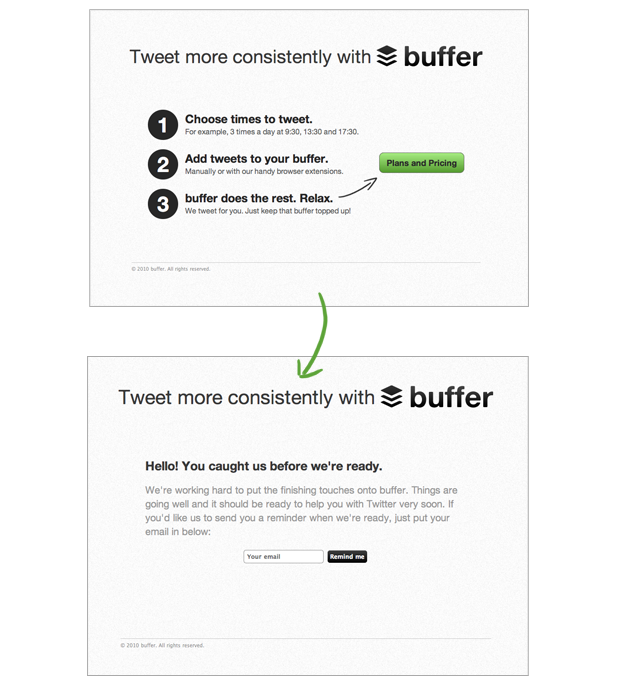 What these examples share is their bare-bones approach. They weren’t “finished”. (And in Buffer’s case the product didn’t even exist yet, they just wanted to see if people would click the button and then capture their email addresses).

What ideas are you squatting on right now?

The thing that’s holding you back is probably the same as for most people: it’s scary to put your stuff out in public.

I know because I get hung up on finishing stuff too… I’ve even been going backwards and forwards about publishing this article, because I’m not sure if it’s good enough.

But the only way to validate your ideas is to share them with other people. Only then can you get the feedback you need to refine your concepts.

If you want to blog, sign up to a free blogging platform like Wordpress.com or Tumblr and start writing. (Read this before you start though).

If you’re not sure what to blog about, test out your topic ideas by tweeting about them, and watching to see which tweets get the most favourites or retweets.

If you’re launching a website, set yourself a time limit. Think of it as a one-man hack day, and celebrate the fact that you’re working in pixels, which unlike print can always be changed. Both The World’s Most Shareable Website and MyCycleLove were weekend projects which allowed me to test my ideas out quickly. (And if you can’t write HTML, trade your design skills with a developer using a service like WeekendHacker).

If you’ve got a product idea, built the simplest version possible, and see if you can sell it to three people, excluding your mother. (Making your first ever sale is a great feeling, trust me).

And if your idea doesn’t quite work out, so what? You can always try a different angle of approach — this is referred to as a pivot in Lean Startup methodology.

Get lean on your creativity, and tough on your excuses

Too many ideas and not enough action is a recipe for disappointment. (The kind that has you waking up in the middle of the night in a cold sweat).

Stop making excuses for not having “finished” it yet.

« Hate being a graphic designer? Don’t. Your job is an escape route, not a trap. Getting unstuck when you’re working on your own projects »