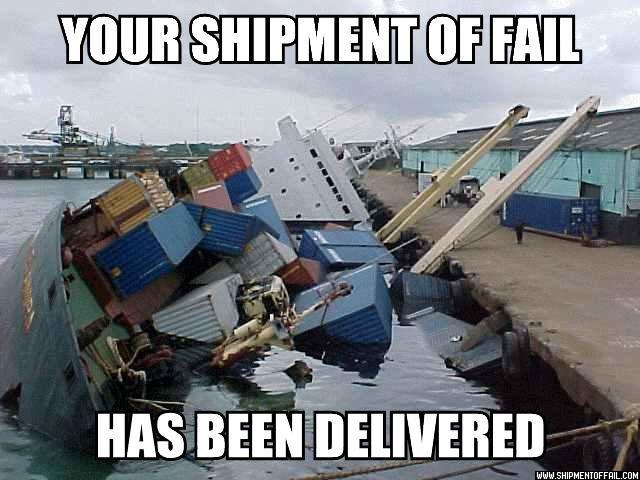 The story of how I  created a hugely popular meme website and then failed (fail being the operative word throughout this article) to make any money from it. Warning: also includes lolcats. </p>

It started when I read something about a girl making $70,000 a month from a MySpace graphics service.

This got me thinking about the value (or not) of “good” design.

What if I booted my usual aesthetic standards out of the window and went lowest common denominator with a blog?

I figured that an anti-design experiment would be fun.

But first I needed some subject matter.

Around this time I was seeing a lot of “fail” images cropping up on the forum I was hanging out on, so I thought it would be fun to collect them together in a blog.

If you’ve spent any time on less serious areas of the internet (say on forums like 4chan) you won’t need an explanation of the fail meme.

As far as I can tell the fail boat meme, which as the starting point for Shipment of Fail, originated in 2007 with an image of a sinking boat that was captioned “All aboard the failboat”.

The fail meme itself is much older of course — the entry for “fail” in the urban dictionary has been in place since 2003 — and there are all kinds of variations of the meme out there in the wild.

Blogging fail pictures seemed like it could be a win.

And for once I was ahead of the curve: “shipmentoffail.com” was available. So I registered the domain and installed a generic (read: ugly) Wordpress theme and set about blogging fail images.

Shipment of Fail was born.

The whole thing was incredibly cathartic for me at first.

But with SOF everything was lowest common denominator. This was base humour. This was an ugly son of a bitch and I didn’t care.

Meme aesthetics require the use of big, bold fonts like Impact. In capitals. With a huge white strokes around them for good measure. Basically the opposite of my usual typographic output.

So there I was, uploading a cheesy new fail picture every day or so, with captions slapped across them IN HUGE CAPITAL LETTERS.

Then, to promote my new blog, I began to post a few images onto a few forums.

I didn’t expect much to happen.

Then I looked at my stats.

Traffic was going up. Fast.

At the peak of its popularity, SOF had an Alexa rank of around 77,000.

Which meant it was amongst the top 100,000 most popular websites on the internet, with around 5,000 people visiting a day.

At one point I was contacted by a broadsheet journalist and SOF was included in the pullout section of a weekend newspaper.

Shipment of Fail was big.

The worst designed website I’d ever created was the most popular.

Everything I thought I knew about the importance of design had been blown out of the water.

I didn’t do anything to promote my site after the initial few forum postings that I made.

There was no email marketing strategy.

But the content marketed itself of course… it was perfect for posting in forums. Memes are good like that.

Without much thought I stuck some Google Adverts into the SOF sidebar and waited to see what advertising revenue I could earn.

Which was enough to buy myself a couple of beers at that time.

Not a bad return for the 10 minutes it took to select and upload a fail image.

The novelty quickly wore off of course. I was constantly trawling through forums looking for fail images.

There’s only so much fail a man can take.

So I decided to offload SOF for as much money as I could get.

One of the first people I reached out to was Ben Huh, the man behind the Cheezburger Network, a sprawling meme empire empire which with the I Can Has Cheezburger? lolcat site at its heart.

Here’s the email that came back from Ben:

I didn’t feel this was enough considering the amount of work I’d put into the site.

So I turned down the LOLcats entrepreneur and set about selling SOF myself.

And so to auction...

I decided that auctioning the site off would be the best option.

Someone left a comment on the auction thread suggesting I could increase the sale price by improving the look of the site a little. (Which, amazingly to me, was probably the first time anyhow had criticised it).

So I bought a budget Wordpress theme and knocked up a 15 minute logo: a crate with “Shipment of Fail” stencilled onto it.

The auction process began and a few days later the winning bid was confirmed as $500.

Hmm. Not as much as I had hoped.

But I needed the money and decided to cut my losses and cash in.

My blogging shipment of fail

Looking back, there were a few things I could have done differently or better.

Anyhow. What’s done is done. SOF was never going to be a long-term career, I don’t think.

I kept in touch with the guy that I sold SOF to.

10 times more than I had sold it to him for.

But you know what, I’m kind of glad now that SOF failed; or rather that I failed to make a nice little chunk of cash from it.

I won’t make these mistakes again if I ever end up selling my current blog. (And in fact, starting a blog with the intention of selling it is a pretty stupid thing to do in the first place).

In fact I’m probably doing myself a disservice by calling SOF a fail.

It was only ever intended an experiment… and experiments can’t fail, because they are just a way to evaluate information, to dip your toes in the water, to run some tests.

So, go and make your own fails happen.

Embrace the shipments of fail.

(But remember that they are really just experiments).

« Nothing to read here, please move along Everything I know about Chinese food »