Until a few weeks ago I had no idea that Matthew Inman — the man behind one of the biggest comics on the internet — was once a web designer.

His irreverent, often angry, sense of humour and “I could draw like that if I wanted” style has earned him cult status, and The Oatmeal now gets millions of visitors a month, grossing around $500,000 in revenue in 2012 (75% from merchandising and 25% from advertising). 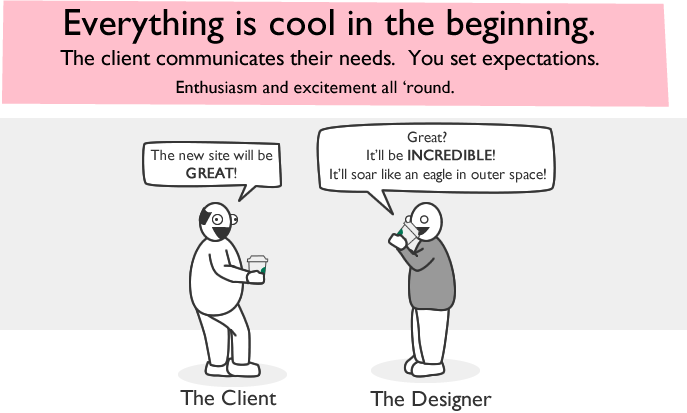 He left his web design job to start a dating website called Mingle2, but soon found that the cartoons he was creating to attract traffic were more popular than the site itself:

The goal of it was kind of to build links, but it didn’t really work as an SEO tool. It just worked as a comic. People loved it. It got more traffic than anything I’d ever done, so that was when I kind of decided I clearly have some kind of knack for this sort of creative stuff and I think it’s a better fit for me than making little marketing gimmicks for SEO.

All of which makes Matthew a perfect unDesign case study — if only he would respond to my emails.

So in the meantime, I’ve scoured the internet for clues and boiled down my findings into this bite-size list of blogging tips.

1. Let your ideas for content germinate when they are ready, instead of forcing them

According to an interview with The Chicagoist, Matt uses a technique called “brain-farming” as part of his creative process:

Why does this work? Probably because your brain works best when it’s relaxed.

“I got an offer from a deodorant company to write” something for their advertising, Inman says, noting that he turned down the product commission flat. “It’s pretty much got to be a truly exceptional client. It it were Comedy Central, I’m all over that. Maybe if it [involves] an actor or actress I like. But Diet Coke, that’s not gonna happen.”

3. Communities don't just happen, you need to build them

“Building and hanging on to an audience is the biggest role of social media,” Inman tells us. “Then every time I make a comic, I can broadcast it out to them. That’s been really helpful. I have this audience waiting for me. It’s been awesome. … You need to be funny and continually make them laugh. But when I started, I also had this [casually inviting] tone: ‘Hey, guys, I just made a new comic – check it out!”

“A lot of people say: ‘How do you do it?’ I just make things that people like. SEO has no bearing on the Oatmeal — I did SEO in my old job [so I know] — but social media has played a gigantic part in what I do.”

Or to put it another way…

“With The Oatmeal, I wanted to create something where the viral marketing itself was the product, rather than trying to put it on something else.”

5. You never know what will resonate with people (So just keep making stuff...)

“The reaction to a comic is usually the opposite of my expectation. There will be times where I will put in three hours of work on a comic and it will fall flat on its face, while one that took me an hour or two will blow up. You just never know.”

Not everything on The Oatmeal is just for laughs. For example “How to get more likes on Facebook” is also packed full of great advice about so-called social media strategy.

Why does creating useful content matter? As Pat Flynn would put it: “Your earnings are a byproduct of how helpful you can be to your audience”.

Which brings me neatly to my last point. (Well it’s Matthew’s really…)

7. Put your energy into making things that are likeable, not into some douchey social media strategy

I’m not going to elaborate on this one. But you can refer to Jeremy Waites’ 80 Rules of Social Media for more tips on this (prickly) subject.

Posted to careers, graphic-design in 2014.

« The false economy of boxes If it sounds like writing, rewrite it. »