The thought experiment that changes the molecular composition of your body

I’ve written before about meditation and my attempts to build mindfulness into my daily habits, but often when talking about it with friends they dismiss it as something wishy-washy, or as something they don’t have time for. Well, here’s something a little more concrete from a new study published in the Psychoneuroendocrinology journal. I have no idea how to even pronounce that, let alone what it means, so let’s cut to a soundbite:

The study investigated the effects of a day of intensive mindfulness practice in a group of experienced meditators, compared to a group of untrained control subjects who engaged in quiet non-meditative activities. After eight hours of mindfulness practice, the meditators showed a range of genetic and molecular differences, including altered levels of gene-regulating machinery and reduced levels of pro-inflammatory genes, which in turn correlated with faster physical recovery from a stressful situation.

What’s going on here? The health benefits of meditation have been enjoyed for thousands of years, but only recently come under scientific scrutiny. This has lead to a greater understanding of how its practice affects the human body physically:

The key result is that meditators experienced genetic changes following mindfulness practice that were not seen in the non-meditating group after other quiet activities — an outcome providing proof of principle that mindfulness practice can lead to epigenetic alterations of the genome. Previous studies in rodents and in people have shown dynamic epigenetic responses to physical stimuli such as stress, diet, or exercise within just a few hours.

Apparently this is the first study to show that meditation causes rapid changes to gene expression (the process by which information from a gene is used in the synthesis of a functional product, like a protein)  in humans. If that sounds too far-fetched for you, consider a less abstract study…

What happens to your brain when you meditate?

Head over to the Buffer blog to delve further into this, but in short: 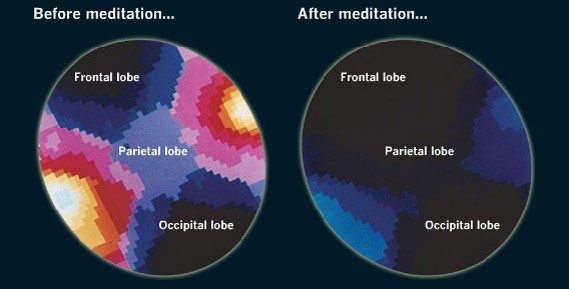 Needless to say, such a huge change in the brain’s activity is thought to have wide-ranging benefits including:

Getting started with meditation

Don’t get put off by the thought of sitting painfully cross-legged on a hard floor for half an hour. I usually site on the corner of my bed when I meditation, facing my window and the tree opposite. And even after 5 or 10 minutes, the world feels a little calmer afterwards. You can try a guided service like Headspace to get started. Or listen to something like Kelly Howell’s 7 minute vacation using headphones. Or even try to sit with your eyes closed for just a few minutes a day. I usually set a (low volume) timer on my phone so I know how much time has passed. Read the rest of my article about the power of not thinking for more introductory tips on meditation.

I’m still very new to all this, so if you’re further down the road than me with mindfulness, I’d love to know what works best for you?