Removing the possibility of stopping 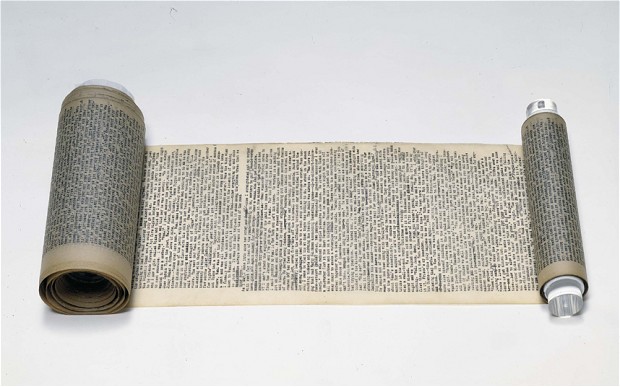 I’m becoming increasingly tired of girls’ online dating profiles quoting the “Here’s to the crazy ones” passage from Jack Kerouac’s On the Road.

Seriously ladies, you need to dig a little deeper. It’s almost as bad as saying that you are a “half glass full” kind of person.

A lot of guys are probably using the same quote too I guess.

Not having read the book yet I’m not really in a position to pass judgement.

But the story of how it was put together has always impressed me: </p>

Written over a period of three weeks in April 1951 in manic bursts of what Allen Ginsberg referred to as ‘spontaneous bop prosody’, Jack Kerouac typed the manuscript on rolls of tracing paper, which he taped together into a long scroll to avoid replacing paper at the end of the page and interrupting his creative flow.

I’m not sure what the digital equivalent is for laptops — perhaps shutting down your internet access?

There are probably as many novelists these days battling internet addiction as there were with substance-based addictions in Kerouac’s day. Pass me the Facebook.

Procrastination is the common enemy, but there are many inventive ways of fighting it.

The French writer and poet Victor Hugo was rumoured to have his valet remove his clothes when he suffered from writer’s block, thus leaving him with nothing to do but sit and write.

And he wasn’t the only one to write naked, apparently the likes of Agatha Christie, Ernest Hemingway and Benjamin Franklin also took off their clothes to help turn on their flow of words. Writing in the bath makes a lot of sense now that I think about it. You’re completely relaxed, and it’s also pretty hard to use a laptop or a mobile whilst you’re in there.

(Just to put your mind at rest, I’m not writing this naked. But if you check back in a few weeks you may well be reading something that I penned in the bath. I don’t know.)

I love the thought of sitting down to write and being unable to stop, of having just the rhythmic click and clacking of the keyboard for company as the words appear on my screen.

In the past I would have thought this impossible. “I can’t write”. Which is what a lot of people have told me about themselves when I explain my 30 days of writing experiment to them.

I think anyone can write, just like anyone can dance, or sing, or draw or paint. It just so happens that for the first few thousands hours you won’t be very good at it. And many people aren’t willing to push past this initial stage (at least not once they reach adulthood).

Previously I would wait for an idea to germinate and then… cautiously… draft a few paragraphs… which would eventually grow into something I considered decent enough to publish online.

But for the past few days I have been simply flipping my laptop open and starting to type into that familiar empty white box.

I don’t really know what the rest of this essay is going to be about.

If I’m lucky I’ll hit on some kind of analogy or minor revelation to close with.

What I’m starting to realise is that it’s no the ending that matters.

It’s the starting.   And then not stopping once you have.

That’s why Kerouac’s thing about taping the rolls of paper together is so smart.

Now that I’m on day 12 of 30, my quality control has gone out of the window. I’m almost halfway and have no intention of letting some bad writing stop me. I’m not as concerned as I used to be about what people will think of what I’ve written. Who cares, really? What did you write today? I don’t care either. Good. Let’s carry on.

I’m also writing this standing up.

I’ve done a full day’s worth of pushing pixels around to make websites and all I want to do now is lie down on my bed and read something.

So the usual distractions of email and the internet have far less appeal than usual.

Finishing this article is much much more appealing.

What makes me want to stop once I've started?

Well, I think it’s often the fear of not being good enough that stops be from finishing.

I’m hesitant about getting the work done and passing it over to the world. (Not that it’s even being passed onto anyone. I’m just hitting a button to push it onto the internet).

Something that, if you google it, definitely seems to be a thing.

My notebooks are full of half-baked lyrics for song which have never progressed beyond a few verses, or solitary choruses. And I have folders and folders on my computer of unfinished music. The thought of stringing it all together into songs and then having to sing them out loud, to have someone listen and perhaps pass judgement, freaks me out. The longer I’ve made music for, the less of it I’ve actually finished or played in public. I once sent some demos to a record label in Glasgow and they liked them enough to write back and tell me to keep sending them tracks. But I didn’t.

So I’m hoping that by refusing to stop, even when my legs and eyes are tired and when I don’t even know what I’m writing, will get me somewhere.

I don’t know where.

So this is kind of like a epilogue now I guess.

If it was a movie we could cut to a nice little montage explaining what happened with the rest of my life.

I’ve always wanted to create a personal montage sequence about something real in my own life.

I could do some kind of intense daily workout routine and get those six-pack abs I’ve always wanted.

Planning a montage sequence would force me to work out all of the steps required to get to that end result.

But I already know the first one.