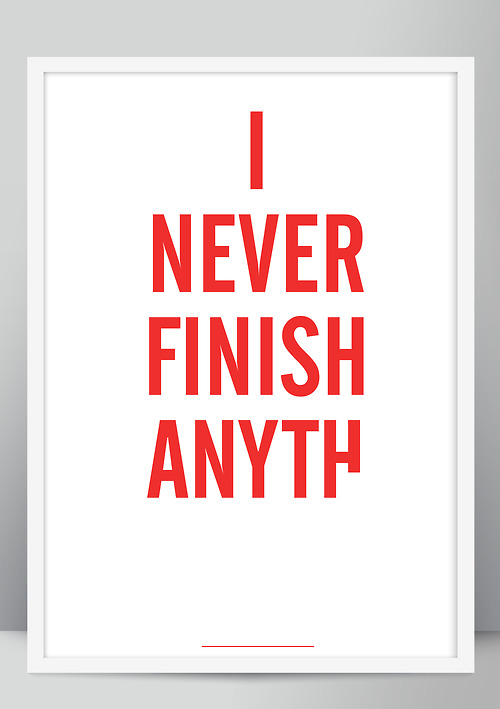 I Never Finish Anything screen print by Brad Rose

I’ll often come up with an idea that I get excited about.

Then I brainstorm a catchy name for it, check the availability of urls and social media accounts, maybe even set up a landing page. It gives me a big rush, and I imagine a dazzlingly bright future ahead for the concept.

And then the idea crawls up and dies inside of me.

Because I don’t actually do anything.

To finish things, you need to fall in love with the part of the process that’s harder to love — the bit where you roll up your sleeves and do the damn thing.

Maybe that’s why it’s got another much tougher sounding name: execution.

The human brain is a brilliant idea-generating machine. In the past we had to convert our ideas into solutions just to stay alive: to make sure that we had enough food… or didn’t get eaten. But now, in the safety of our comfortable, hygienic, homogenised 21st century lives, it’s all too easy to fall asleep on our true potential.

Wake up and smell the hard work

Your idea doesn’t mean diddly-squat until it’s out in the world. And to do that is going to take some hard manual labour.

So to stay on track, you’ll need to engage with the execution process as much as the idea itself:

None of my various bright ideas — a social network for sneaker collectors, customisable artwork of your bicycle, a recipe sharing platform, a book about designers turned entrepreneur (OK, that last one I am actually set on doing) — have come to fruition yet.

And whilst CycleLove (and its sister shop CycleLux) might be building momentum, I still have a huge hangup about creating the ebooks or information based content about cycling or whatever it is that I’ve been talking about for months and months. It’s still a blog, not a business, and costing me money instead of making it.

I chickened out of the work.

You need graft, or grit, or gumption, or whatever you want to call it.

Whether it’s by actually blogging on your blog, or starting your startup, value is created by doing.

It’s easier to sit around and talk about building a startup than it is to actually start a startup.  And it’s fun to talk about.  But over time, the difference between fun and fulfilling becomes clear.  Doing things is really hard—it’s why, for example, you can generally tell people what you’re working on without NDAs, and most patents never matter.  The value, and the difficulty, comes from execution.
—Sam Altman

Dial down the resolution(s)

When I looked back at the list of goals I'd set out for 2013 the other day, I felt pretty embarrassed. Especially as it's published in plain sight on the internet. I didn't come close to achieving any of my resolutions. Not one thing on the list. But I know that beating yourself up about this kind of stuff is stupid. (Make changes, not criticisms). So... I haven't made any New Year's resolutions this year. You don't want high resolutions anyhow — you want low resolution. You want to let go of the fear of fucking up, of it not being perfect, of what other people think, of things that probably won't ever happen, and just crank that stuff out, baby. ## Instead of trying to finish everything, try to finish one thing.

What are you going to finish today?

PS. Discuss this article on Hacker News — lots of insightful comments to be digested here.

« In conversation with designer-turned-writer Paul Jarvis Why the 25,000 views my last article got in 24 hours isn’t the metric I care about »