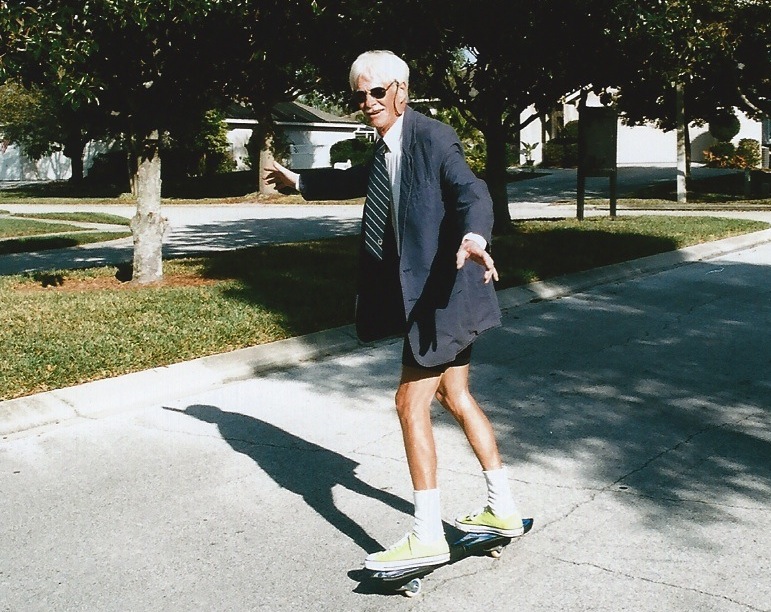 Jumping barefoot between rocks, juggling at the top of a ladder, throwing knives, or cruising down your street on a custom-built skateboard.

All things you might do in your youth (or dream of doing).

They also happen to be everyday activities for Stephen Jepson, who turns 75 on his next birthday.

Originally trained in ceramics and a professor at the University of Florida, he's now a walking, talking, leaping advocate for a lifestyle which he calls Never Leave the Playground.

The core concept is that play is the key to a long and healthy life, and that playground activities are as important for older adults as they are for the young, because they grow neural pathways, develop balance and coordination and even help prevent Alzheimer's and dementia.

It sure seems to be working for Stephen, whose girlfriend is sixteen years his junior and says that "he runs circles around me".

Age-proofing your brain and body

If he seems a little like a mad scientist to you, consider the evidence from neuroscientists who studied the brain activity of people learning to juggle, and found that it strengthened neural pathways in as little as six weeks:

We tend to think of the brain as being static, or even beginning to degenerate, once we reach adulthood. In fact we find the structure of the brain is ripe for change. We've shown that it is possible for the brain to condition its own wiring system to operate more efficiently.

Juggling isn't the only age-proofing exercise which Stephen practices — he uses his feet to manipulate marbles, jumps over rails and hoops, and practices throwing and catching balls with alternate hands.

I've watched several interviews with him now, and what struck me is that he never looks like he's 'working out' in the way you would at a gym. (I'ver never like the idea of paying to sweat in a confined space with other people). Somehow we've turned exercise into a task, something to cross off a list, rather than integrate into our everyday lives.

Be bold in your life choices

In a recent interview for American Parkour, the conversation turned to the question of whether you can reach a point in your lief where it's too late to learn new skills.

You can probably guess what Stephen had to say about that...

Seeing Stephen in action, I've realised that my life could do with more fooling around.

Unadulterated could be the perfect word to describe what's missing, because many of the things that I don't give myself permission to do as an adult are the things which could help.

When's the last time you felt like a kid in a playground?

Posted to Uncategorised in 2015.

« We’re all kind of weird and twisted and drowning Excuses, excuses »