When people see John Kitchen gliding along Pacific Beach, they usually think he’s some random homeless guy who has stolen an expensive pair of rollerblades.

What they don’t realise is that John is a former neurologist who underwent a radical transformation in search of a different way of living.

After realising that he had become a “typical, institutionalised, educated Western man” he quit his job to spend endless hours rollerblading along San Diego’s beachfront.

What drives a man to do nothing but rollerblade all day for years and years?

Kitchen sees his unique style of rollerblading as a spiritual experience which connects him not only with the Earth, but with the playful mind of a child.

It’s clear from the smile on his face, and the reaction of San Diego residents who christened him “Slomo” and high-five him as he skates past, that something radical is happening inside his brain.

In essence it’s a form of meditation.

And as someone who rides a bike as much as possible, I share his belief that self-powered movement can transform your mental state.

If all this sounds a bit wishy-washy, consider the neuroscience which Kitchen incorporates into his practice. The vestibular system, tucked away inside our ears, is what controls balance and spatial awareness in humans and most other mammals. But it’s been shown that music can affect this system, hence perhaps, the primal urge to dance to a beat. So it doesn’t seem far-fetched that rollerblading or cycling can have an equally dynamic impact on our brain activity as dancing.

How to find your flow

When’s the last time you were so engrossed by something that hours passed by without you realising it? ⬆ Click to tweet this

In my twenties I used to spend long nights coding websites or programming electronic music. Often I’d be up until 3 or 4am without meaning to. Thinking back, I wasn’t even too bothered about the end result… the act of creating itself was more important.

Mihaly Csikszentmihalyi is a Hungarian psychologist who dedicated his career to studying the concept of flow. His define flow as a mental state “in which people are so involved in an activity that nothing else seems to matter; the experience is so enjoyable that people will continue to do it even at great cost, for the sheer sake of doing it.”

According to Csikszentmihalyi there are 5 essential steps to reaching a flow state:

Looking at the other states in Csikszentmihalyi’s flow theory diagram, the fine line between flow and worry or boredom becomes more apparent. 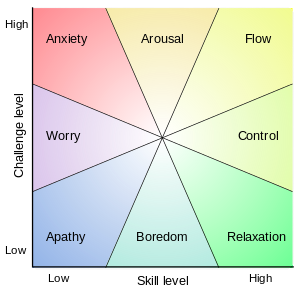 What’s clear is that we need to actively seek out experiences that induce flow, and try to remove the interface of our “thinking” minds. (Letting go of any expectations about the end result is a good way to start).

It’s not easy, but the rewards can be life-changing.

I’d love to spend more time in a flow state when I’m designing, but usually I’m interrupted by emails, meetings, and all the other distractions of the modern workplace. That’s not to mention the usual bothersome thoughts like “Is this actually any good?”

Sometimes as creative people, the only thing we allow ourselves to be certain of is our own self-doubt.

Which really sucks when you think about it.

And the next time you find yourself overthinking your actions, remember Slomo’s four word mantra:

Do what you want.

« A normal person’s guide to public speaking (Or: How to give a talk without losing your marbles) Emails that get designers fired »