The unspoken D word that eats you from the inside.

Just like I did every other day when the weather wasn’t good for cycling, I got the bus to work.

But as we got closer to my stop, a dark feeling swelled inside the pit of my stomach, and I realised that I couldn’t complete my journey.

So I emailed my boss at the design studio were I was working a sick note, and stepped off the bus on the wrong side of the river.

I remember picking up art books in the shop at a gallery. Staring at them. Realising that I hadn’t done anything with my life worth writing a book about.

And for the rest of the day, I shuffled around London like a zombie, trying to work out what was happening to me. Sensing that it was something alien and I might want a record of it, I did something I don’t do that often: took a photo of myself: 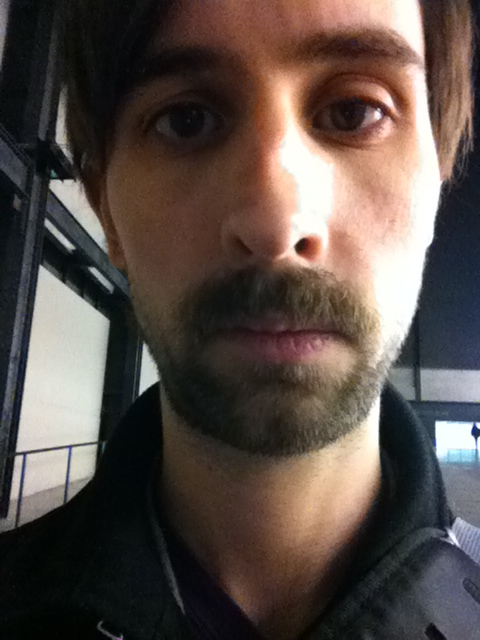 Now, more than two years later and looking back, the warning signs had been there for a while.

It had started on my lunch breaks.

I began to dread walking back up the stairs to my desk after going out for food. Such a simple procedure; to walk up them. But the closer I got to the top, the heavier my feet became.

Things got worse, and the reluctant footsteps became mini panic attacks. I didn’t tell anyone what was happening though, hoping that they would go away.

They didn’t, and eventually it got to the point where I physically couldn’t go to work that day.

I took two weeks off work sick. I didn’t know what to do with myself. I slept in, lay in bed, lounged around, stared bleakly at things, and cried. Cried and cried and cried.

My then girlfriend was working from home at the time. She told me I needed to get some help (a phrase that always comes with invisible quote marks), and gave me the number of a friend’s psychotherapist.

Because I didn’t know what else to do, I picked up the phone, and found myself trying to explain what was happening to someone I hadn’t met before.

A week later I was sitting face to face with my new therapist (let’s call him Miguel) and beginning the process of therapy.

Little by little, I began to open up. Miguel explored my past: school, family, upbringing, and my present: work, relationships, friendships. I realised a lot of things about myself I never knew, and that it wasn’t just my job that was making me depressed.

A month or so later a new option was presented: group therapy.

Who would want to discuss their secrets with strangers? At first I was freaked out by the idea. Then I realised that things couldn’t get any worse than they were already, and decided to give it a try.

Once a week I joined a handful of Miguel’s other patients, and we talked about our problems for a few hours.

No easy task for me, as I was resolutely shy, and expert at shutting down conversations. It helped so much though — not just sharing my own problems — but seeing how other people were coping (or not) with their own. I think therapy could be the best investment in myself I’ve ever made.

A third of the people I met during those sessions were graphic designers.

I don’t think it was a coincidence.

Something about the design profession is prone to shredding people's insides.

It might be the eyes-on-pixels stare into a computer screen. It might be the unwavering obsession with making things just so, combined with the client who doesn’t (ever) quite get it. It be the incessant deadlines and long hours.

I do know that lots of designers are suffering or have been suffering from depression, and no-one is talking about it (openly).

Which is why, as painful as it was, I felt compelled to write this article. I wrote the headline and then stared at it for half an hour. I stopped a couple of times already this morning to wipe tears from my eyes.

It's ok for things not to be ok.

One of the things that therapy has taught me to value is honesty. If you delve into my writing on this blog, you’ll find admissions of things I would never have dreamed of making public before. Honesty is a long lost friend you need back in your life.

But at first I didn’t tell people that I was seeing a therapist.

I was too embarrassed to admit it, and imagined the questions they might ask me…

“What’s wrong with you James?”

Nothing out of the ordinary, of course.

Eventually I began to tell people what had happened to me. About the panic attacks, the crying, the not being able to get off the bus.

And as I opened up to people, some of them shared similar stories with me. Time taken off work due to depression. A feeling of not knowing, sadness, an inability to do things or even get out of bed in the morning.

Depression doesn't have to be a silent scream

If you don’t talk about depression, it will eat you up from the inside.

Not in a single gulp, but in small gnashes that you don’t notice until there’s a huge part of you missing.

If it’s eating away at you right now, know that you’re not alone.

Be kind to yourself.

And most importantly, talk to someone close to you about it.

It will help, I promise.

For further discussion see Designer News and Reddit/Graphic Design. I’ll be writing more on these issues in future articles — scroll down and join my mailing list below to stay updated.

« The accountability hacks I used to blog 30,000 words in 30 days, and what it taught me about writing Fewer, shorter, better emails. »